* The dollar bugs rule the roost once again….

* Gold gets bashed on Wednesday, Chuck says it’s a “sign”…

Good Day, and a Tub Thumpin’ Thursday to you! In honor of Tub Thumpin’… I get knocked down, but I get up again, you’re never going to keep me down…. Story of my life since June 2007, for sure! Well, the rain stopped yesterday morning, and the sun came out, but it was still just a little too chilly for yours truly. I did sit outside in the sun to eat my lunch, but that was it… I see no reason to be out trying to get some Vitamin D, with a jacket on! And with my bald head, a baseball cap needs to be worn any time the temps dip below 70! Well, I didn’t get much flack for my stance on the thought that the economy needed to be opened up… Thank you for holding back! 10cc greets me this morning with their song: The Things We Do For Love….

There is one other thing that I left out of yesterday’s thought on opening up the economy, and that is, something we should have done in the beginning to avoid all this mess…. And that is, we all know who’s most at risk, right? (yes, I’m one of those most at risk, but… I’m retired, so I don’t have a job to go to!) We should have, and could still do it, quarantine all the folks “at risk”, and allow the rest of the people that want to work, go to work! Of course, then there’s the fact that as Americans we’ve become so lazy, and would prefer to sit at home and receive payments from the Gov’t instead of going to work…. If I were younger, and not have cancer, and congestive heart disease, I would be champing at the bit to go to work! But then that’s just me…. I guess…

OK… The currencies lost more ground but not that much in all, yesterday, with the euro falling below 1.08… Shoot Rudy, just last week the euro was above 1.10… UGH! There was something else  that I missed talking about yesterday, and so… here goes…. After reaching its smallest deficit since September 2016 in February, the U.S. trade balance rose again in March. The overall gap in goods and services trade widened to $44.4 billion from a revised $39.8 billion in February. They say it was a “crash” in exports…. Well… other countries around the world have shut down their economies too, so they don’t need our exports, especially with as high a price that they have on them, due to dollar strength!

Another thing I talked about yesterday, I left out a very important caveat…. When I said hold cash, I left out this… “hold cash until the bank begins charging you for deposits”…. I can’t believe I forgot to say that…. Because, once the bank begins charging you for depositing cash into your account, there’s no reason for them to hold anything more than the amounts you need there to pay online bills or write checks against….

Of course, that’s when we get to the scenario I painted for you a couple of weeks ago, when I pulled out a Dow Theory Letters piece, and told you how I believed that getting to negative rates was “in the cards”, and that when consumers began to pull their funds, the Gov’t would implement a new low, forbidding physical cash, and that your bank balance was just digital units, and a whole bucket of bad things that go along with that…. So… in the end we had better hope that we never go to negative rates here in the U.S.

Let those countries that have no sense do that… Like Switzerland and Japan, and the Eurozone, and Sweden (although Sweden has said they are through with negative rates) Oh me-o-my…. What a tangled web we live in, eh?

The Bank of England (BOE) is meeting this morning, while my fat fingers are flying around on the keyboard…. I suspect that they’ll leave rates unchanged, and then talk about all the horror that the COVID-19 virus has brought to their economy, and the need to do more stimulus work, which means more debt, and so on…. I would think that traders would listen to the BOE’s cries of despair, and sell pound sterling accordingly… But we do live in a world of opposites these days, so you never really know, now do you?

While I’m talking about England, they haven’t been in the news too much lately, as this crazy news media have focused on China, the U.S. and Russia…. Did you know that Israel bombed Syria the other day? And why didn’t that news be front and center, and cause a rash of buying in Gold? Because the media chose not to highlight it…. Ch, ch, chain, chain of fools…

One day, the Oil traders are high fiving each other because they think that the production cuts are working as the price of Oil rises…. And then the next day the story on the production cuts isn’t as rosy, and Traders sell Oil again, after 5 days of rallying… What changed? Ahhh Grasshopper, come sit, and listen…. Traders began to realize that no matter how much production is cut, the supply of Oil is still getting added to, because, at this time, there’s JUST NO DEMAND for Oil…. I knew they’d figure that out sooner or later…. They don’t have brains like a box of rocks, but, sometimes it takes some fracking to get a thought through to them! HA!

Well, Gold got hit yesterday to the tune of $22 bucks and brought the shiny metal back below the $1,700 figure, to close at $1,686… This is a sign folks…. A sign that’s telling you, if you’ve procrastinated buying Gold before, you need to get on the Magic Bus…. Every day I get in the queue (too much, Magic Bus), To get on the bus that takes me to you (too much, Magic Bus) Ahh, a little vintage Who for you this morning… This “sign” has been brought to you by the Aden Research Team…. And main sponsor, Chuck Butler!

Gold is attempting to win back that lost ground yesterday, as it is up $8 in the early trading today…  Back and forth, back and forth… But eventually, this will stop and when it does, it’ll be a lot like musical chairs… When the music stops… Will you find an empty chair? Will you be able to buy physical Gold when the music stops? You see, I’m thinking the answer to that question is a “hard no”!  You see, I believe that Gold will be in such high demand, that getting it in your hands is going to take Superman getting it for you….

I recall a joke that goes something like this…. A man is praying to God, and asking him why he can’t win the Lottery… And finally God has had enough, and talks to the man and says, “Why don’t you buy a Lottery Ticket?”  I rest my case on the drop in price of Gold being a “sign”…..

We were also to see the color of the Quarterly  Treasury Refunding number, but something happened and it didn’t get printed… You don’t think that…. Nah, that couldn’t be, the Gov’t wouldn’t dare try to print this under the cover of darkness so everyone can’t see just how much money they’ve spent?  Nah… that could never happen in this day and age… right?

To recap…. The currencies got sold, along with Gold yesterday, and all this back and forth stuff is really beginning to give Chuck a rash!  The BOE is meeting this morning, and Chuck thinks that the BOE will leave rates unchanged and talk of all the horrors that the COVID-19 virus has brought to their economy…  And Chuck gets caught up on all the things he’s forgotten to talk about this week….

For What It’s Worth…. Well, this coming Friday will be the BLS version of a Jobs report here in the U.S. for April… I always refer to the monthly print as the “Jobs Jamboree”, because long ago in a galaxy far from here, Traders used to gather around their Telerate or Bloomberg screens and hold monthly bets on the Jobs number that would show up on their screens, and then the markets would trade accordingly. Yesterday, the ADP Employment Report showed that employers shed 20.2 Million jobs in April…. Now, a couple of Fed Heads from Chicago, have built a new method of coming up with the Unemployment Rate, which will be quite different than the hedonically adjusted BLS version on Friday, the story of their new method and such can be found here: https://news.trust.org/item/20200505121915-v51r0

Or, here’s your snippet: “The official U.S. unemployment rate for April, due out this Friday, will likely vastly understate job destruction from the coronavirus pandemic, so a pair of economists at the Federal Reserve Bank of Chicago set out to create a measure that captures the true extent of labor market losses.

Their estimate: a ‘U-Cov’ rate in April of somewhere between 25.1% and 34.6%. That’s compared to the 16% rate forecast by economists polled by Reuters, who also estimate American employers shed more than 20 million jobs last month.

“The official unemployment rate may only capture a fraction of these losses,” Chicago Fed economists Jason Faberman and Aastha Rajan wrote in a blog released Tuesday, describing their proposed U-Cov measure of labor market under-utilization.

Many of those newly out of work will not be captured in the traditional U.S. unemployment measure, which counts only those who are out of a job and actively looking for work.

The Labor Department also publishes broader measures to include those working fewer hours than they want to, and people who have looked for work in the past but not recently.

But even such broader measures may miss those who are on unpaid leave and expect to return to their jobs once the crisis has passed, or people who are not searching for jobs because of stay-at-home orders, the Chicago Fed researchers wrote.”

That’s it for today….  HEY!  Sunday is Mothers Day!  There are times during the year when I truly miss my mom, but on Mothers Day, it always hits me like a brick wall, that she won’t be there to hug, and tell her I Love her… So, do me a BIG favor, make sure you tell your mom your love her, I know we can’t hug right now, so the statement of Love will be enough…  My mom used make a BIG deal out of my birthday…. She used to come down to the basement and sit and listen to the band practice songs…  She was my biggest backer…. OK… I’ll have a little poem about moms following this finale….  Three Dog Night takes us to the finish line today with their apropos song: Mama Told Me Not To Come….   (Live at the Forum, which was one of the first albums I ever bought with my own money!) I hope you have a Tub Thumpin’ Thursday, and will Be Good To Yourself! 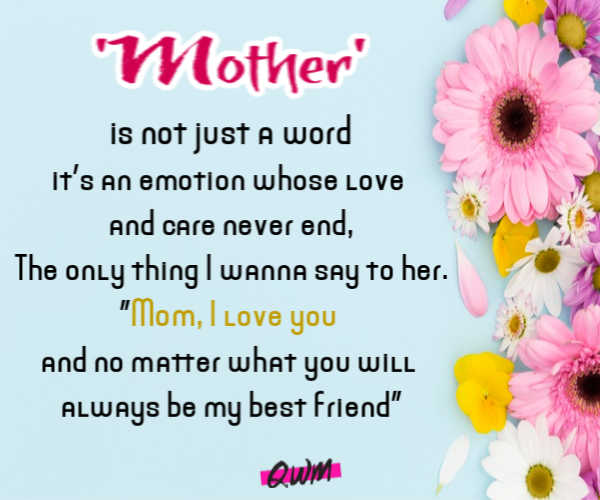